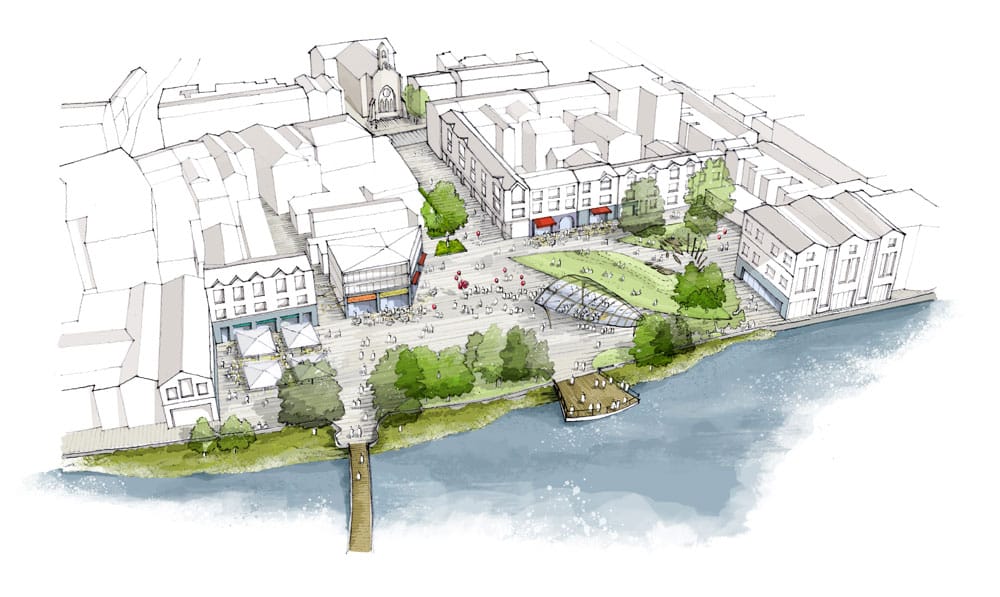 Minister of State at the Department of Rural and Community Development and the Department of Communications, Climate Action and Environment, Seán Canney TD, this morning announced Fáilte Ireland investment of over €2.5million for the Sligo Cultural Plaza.

This follows investment of €201,000 by Fáilte Ireland into the Sligo Pontoon, which was officially opened today. Both projects will have a “transformative impact on Sligo town as a tourist destination”, according to Orla Carroll, Director of Product Development at Fáilte Ireland.

The investment will “provide a vibrant hub of activity in Sligo and is expected to generate €7.7m in revenue for the region in its first five years of opening.”

Following the announcement, Minister Canney also officially opened Sligo Pontoon. This new 27metre floating jetty at the Historic Riverside Quay Wall, which was developed by Sligo Tourist Development Association Ltd with Fáilte Ireland investment of €201,000, was completed and commenced operating at the start of the 2019 Tourism season.

“As Chair of the Atlantic Economic Corridor Taskforce I believe this type of investment is of paramount importance for the progression of balanced development in our country as set out in the Programme for Government. The Government is proud to support innovation in tourism and I’m delighted to be here today to announce more than €2.5million in Fáilte Ireland investment for a spectacular new cultural hub for Sligo town.

Without funding such as this, tourism would not be the major industry that it is today – one that employs 260,000 people and sustains communities nationwide. Sligo Pontoon, which I also had the pleasure of officially opening today, is a great example of how investment in tourism can enhance a location and the visitor experience. The Pontoon will provide opportunities for existing and new tourism businesses to create and expand their products and services and support access to Lough Gill for sport, recreation and tourism opportunities.”

“Today’s announcements are hugely significant in terms of Sligo’s tourist offering, and mark the culmination of exemplary work by the various agencies. The new cultural plaza will provide Sligo with a much need public cultural area, while the new pontoon will prove to be a very popular amenity on the shores of beautiful Lough Gill.

Sligo’s many attractions combine to frame that elusive concept known as ‘quality of life; outstanding natural scenery, first class service and hospitality sector, progressive and dynamic third level colleges’. Add to that wonderful mix: iconic literary figures, a treasure of ancient monuments, rich musical tradition across all genres, enchanting trails and scenic walkways. Taken in isolation, these jewels would enhance any setting, collectively they mark out Sligo as a special place.”

“Tourism is a sector that has seen significant growth in recent years, but we are facing uncertainty with Brexit on the horizon.

It’s even more important now that we develop new visitor attractions to give overseas tourists compelling reasons to visit Ireland. The Sligo Cultural Plaza will transform a town centre car park into a vibrant outdoor space which will offer a dynamic events programme and act as a central focus for many of Sligo’s attractions such as Sligo Abbey, Sligo Gaol and the Yeats building. This, and the Sligo Pontoon, have both been funded through our large capital investment scheme and are designed to complement each other. These will be truly transformative for Sligo as a tourist destination.”

“Today’s  announcement by Minister Canney provides a major impetus to the vision outlined by this Council and our partner agencies as we continue our efforts to grow and develop Sligo as the economic and cultural hub of the northwest. The new cultural plaza will transform the existing city centre car-park into a flagship tourist attraction and will be a welcoming focal point for visitors.

It will also cater for a range of  activities scheduled as part of a year round calendar of events. Similarly, the delivery of the new pontoon in association with Fáilte Ireland and Sligo Tourist Development Association is a significant enhancement of our tourist infrastructure. This facility will be the catalyst to attract many more visitors to a stunningly beautiful area of our county.

This has been a very positive week for Sligo; in addition to today’s announcement, we have also launched a new brand, and website – Sligo.ie – showcasing Sligo as an ideal place in which to live, invest or visit. We are on the cusp of something very positive, and if we continue to harness the abundant energy and local goodwill, there is no limit to what we can achieve.”

“We’re delighted to have Minister Canney here today to officially open Sligo Pontoon. After three years in development, the new floating jetty opened for business ahead of summer season and it has already proved to be a great asset for Sligo town, providing new access to Lough Gill and the Garavogue River for tour boats and those operating water sports enterprises.”

The Fáilte Ireland investment of €2,523,256 for the development of Sligo Cultural Plaza and the Garavogue River Trail comes under its Grants Scheme for Large Tourism Projects 2016-2020. The total project cost, including funding from Sligo City Council, will be €3.6million.

The Fáilte Ireland investment of €201,000 for the development of Sligo Pontoon was also part of the National Tourism Development Authority’s Grants Scheme for Large Tourism Projects 2016-2020. The total project cost, including funding from Sligo Tourist Development Association Ltd was €270,000.

Fáilte Ireland’s Grant Scheme for Large Tourism Projects is funded under the Government’s Project Ireland 2040 strategy with the aim of driving sustainable growth in the Irish tourism sector and higher revenue and job creation around Ireland.